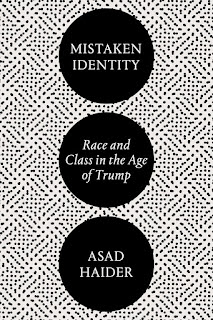 A powerful challenge to the way we understand class, identity, and the history of anti-racism

The phenomenon of "identity politics" represents one of the primary impasses of the left, and has occasioned the reignition of frustrating debates between the partisans of race and class ad infinitum. In Mistaken Identity, Asad Haider reaches for a different approach—one rooted in the rich legacies of the black freedom struggle. Drawing from the words and deeds of black revolutionary theorists, he argues that identity politics is not synonymous with anti-racism, but instead amounts to the neutralisation of its movements. It marks a retreat from the crucial passage from identity to solidarity, and from individual recognition to collective struggle against an oppressive social structure.

Mistaken Identity is a political and theoretical tour de force, an urgent call for alternative visions, languages, and practices against the white identity politics of right-wing populism. The idea of universal emancipation now seems old-fashioned and outmoded. But if we are attentive to the lines of struggle that lie outside the boundaries of the state, we will see that it has been placed on the agenda once again.